Ahead of langets 3 mm

The Vijayanagara Empire was a large Hindu empire in south India and the Deccan Plateau which lasted from 1336-1646. The many smaller Hindu states were initially often at war, but were united against their efforts to ward off Islamic invasions from the north that they saw as an imminent threat against their shared Hindu culture. Its capital was Vijayanagara, after which the empire was named. Its ruins are now a UNESCO world heritage site. Located around Hampi, in Karnataka, India.

This sword is known in the literature as paṭṭiśaḥ (पट्टिश) or khanda (खंडा). It is one of the oldest forms of swords in India, and is already depicted in temples in Orissa from the 2nd century AD. This type of sword is often depicted held by a deity, where it symbolizes wisdom cutting through the veil of ignorance or -in the case of Durga slaying the buffalo demon- the victory of good over evil.

Sikh Guru Gobind Singh (The Sikhs 10th Guru) used a somewhat similar old southern pattissa to administer Amrit (holy water) to the Sikhs when he created the Khalsa in 1699. (The Khalsa is a group into which committed Sikhs can be initiated to demonstrate their devotion to their faith, symbolically giving their life to their Guru). This Patissa is now held in reverence at Takht Kesgargh Sahib at Anandpur Sahib.

The typical double-edged blade has the shape of a spoonbill's beak and is forged from a single piece of wootz steel with its characteristic burl pattern. The hilt is made of iron, constructed from various forged parts that are finished with chisels and files. The handle was once decorated with gold and silver, of which only some traces are now left.

On top of the handguard are two small feline creatures. These are mythical animals called yali, symbols of strength and vigilance. They show up prominently as decorative elements in 16th-century temple architecture and were the royal symbol of the Vijayanagara empire. The aesthetic with -to our contemporary eyes- futuristic lines is typical of work from the late Vijayanagara empire of the 16th century.

Wootz steel is a very advanced type of steel that was made in crucibles where special iron ore was heated with leaves of certain plants. Pieces of glass lay on top. The crucible became so hot that the molten glass sealed it hermetically so that the leaves and ore could undergo a chemical process without losing any elements to vapors. The resulting steel was unusually hard but also tough at the same time. What they didn't know then, and we do now, is that the process formed carbon nanotubes that are responsible for the special properties of this material.

Forging wootz was very specialized work that had to be done at lower temperatures than normal iron and steel forging, otherwise, the special carbon structure could burn and go lost. There were few blacksmiths who could do it well and the exact methods of working were often secrets kept within the workshop or guild. The process made making larger one-piece swords was particularly difficult work, and so this blade is a testament to the maker's skill.

This sword is one of a small group of somewhat similar examples, among which one in the British Museum, accession number 09.1924.11-11.57.1 one in the Royal Collection Trust, accession number RCIN 38018. The latter was presented to Prince Edward by Muktamabai Chhatrapati, Princess of Tanjore, during his tour of India in 1875-76.2 These pieces were already quite old when she presented them. 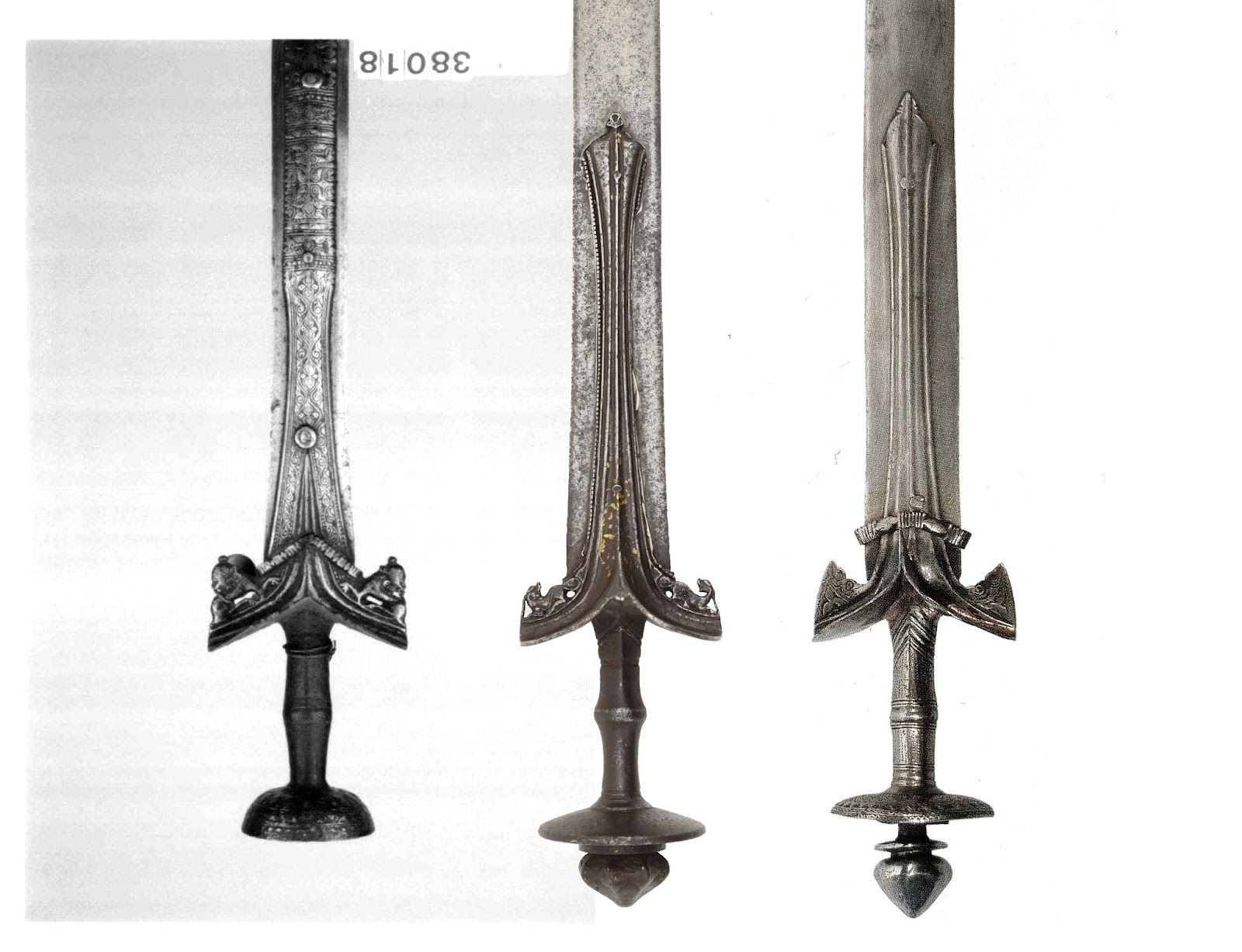 Our current example appears to be the earliest example of this group, still with the flowing geometry that becomes more restrained on pieces of the 17th century. While its condition is not the best of the three, it is more delicately executed and appears to be the only one that has once been decorated with gold and silver overlay.

The blade was lightly cleaned and etched by Philip Tom to re-reveal the wootz pattern that had faded over time, bringing it back to its original intended aesthetic.