The Eight Banners were the elite army of the Qing dynasty. The men under the Eight Banners were called "Bannermen". Bannerman status was hereditary, and those born under the banners could only become warrior or clerk in the Qing administration. Most of them were Manchu, but there were also Mongol Eight Banners and Chinese Banners, the latter consisted of descendants of troops that joined the Qing cause in the early stages of the conquest phase.

The Eight Banners consisted for a large part of mounted archers called the xiāoqī (驍騎) or "Valiant Cavalry", and some specialized units such as the Vanguard, Guard, and Jianruiying. Their equipment was meticulously regulated and recorded in among others the Huangchao Liqi Tushi (皇朝禮器圖式), or "Illustrated Regulations on the Ceremonial Paraphernalia of the Dynasty".1

Helmets for parade were of lacquered hide already in the 18th century but those for in the field were still of steel at least into the early 19th century.2 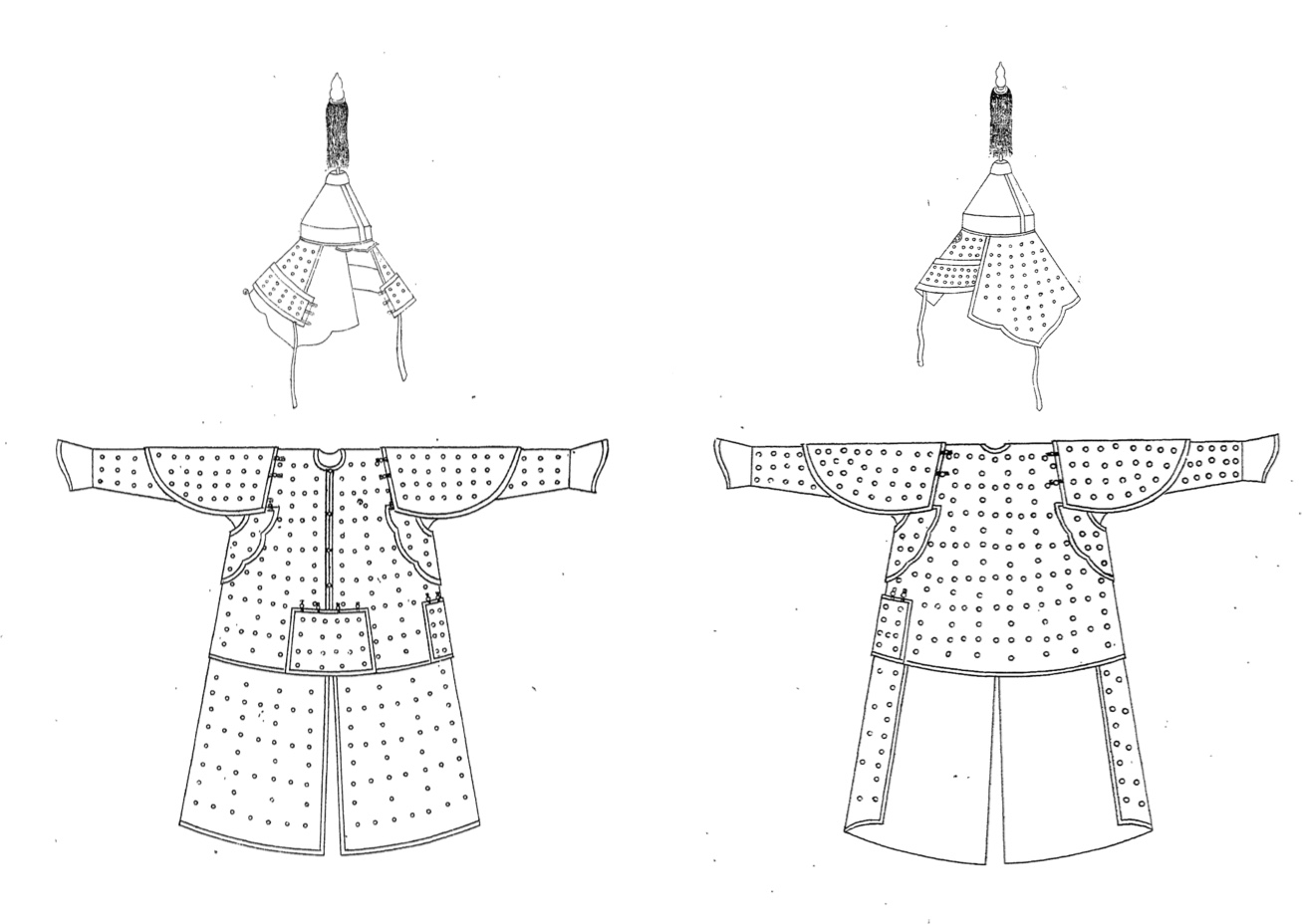 Woodblock illustrations of the armor of Qing Bannermen in the 1766 edition of the Huangchao Liqi Tushi showing the flaps and finials that went with these helmets. The colors corresponded to the banner the soldier served under, or the colors of his special unit.

Notes to introduction
1. Pu Jiang et al., eds., Huangchao Liqi Tushi (皇朝禮器圖式), or "Illustrated Regulations on the Ceremonial Paraphernalia of the Dynasty", Palace Edition of 1766 (British Library, 15300.e.1). This version is based on a manuscript of 1759.
2. See the Qianlong (1791) and Jiaqing (1805) editions of the qinding junqi zeli (欽定軍器則例) or "Imperially Commissioned Regulations and Precedents on Military Equipment" for mentions of steel helmets issued to the various troops under the Eight Banners.

A classic example of a Qing Bannerman's helmet. It is made of sheet steel, two large plates make the main cone. They are riveted together and reinforced on both sides of the seam with strips of steel. They join at the top in a spool-shaped piece that holds a tube that was used for the finials that denoted rank. The spool-shaped top is typical for helmets from the late 18th century onwards and is a good handle to date these by. At the front of the helmet is an extra protective plate for the forehead with two shallow cutouts for the eyes. Riveted to the front is a visor of characteristic Qing form, its contour forming three peaks. The outside of the helmet in semi-bright polish with some pitting, but overall in good shape. The inside of the helmet with a deeper, dark patina. Around the lower rim of the helmet are a set of holes for the rivets that used to hold the side and back flaps that were in the colors of either the banner the soldier belonged to or in case he was special forces the colors designated for their unit. The Jianruiying, for example, would have blue flaps with yellow edging.

A classic example of a Qing Bannerman's helmet, as worn by the elite Eight Banners Valiant Cavalry, Vanguard, Guard and Jianruiying units. 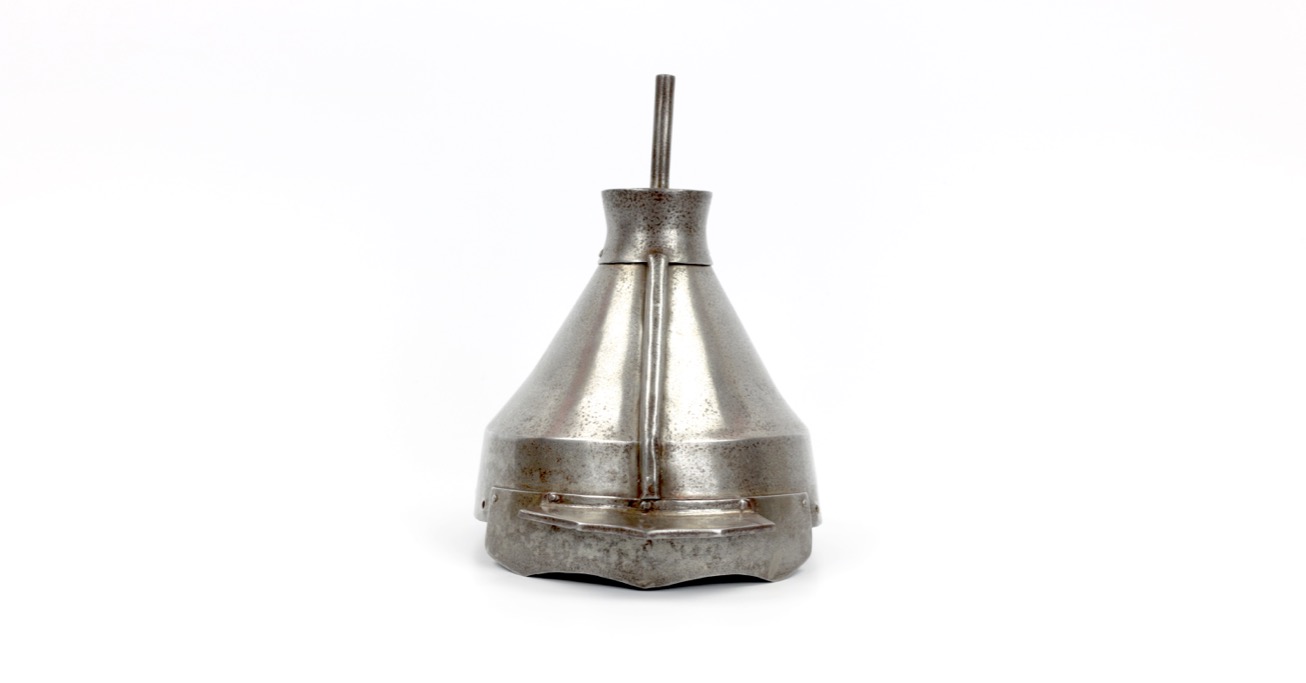 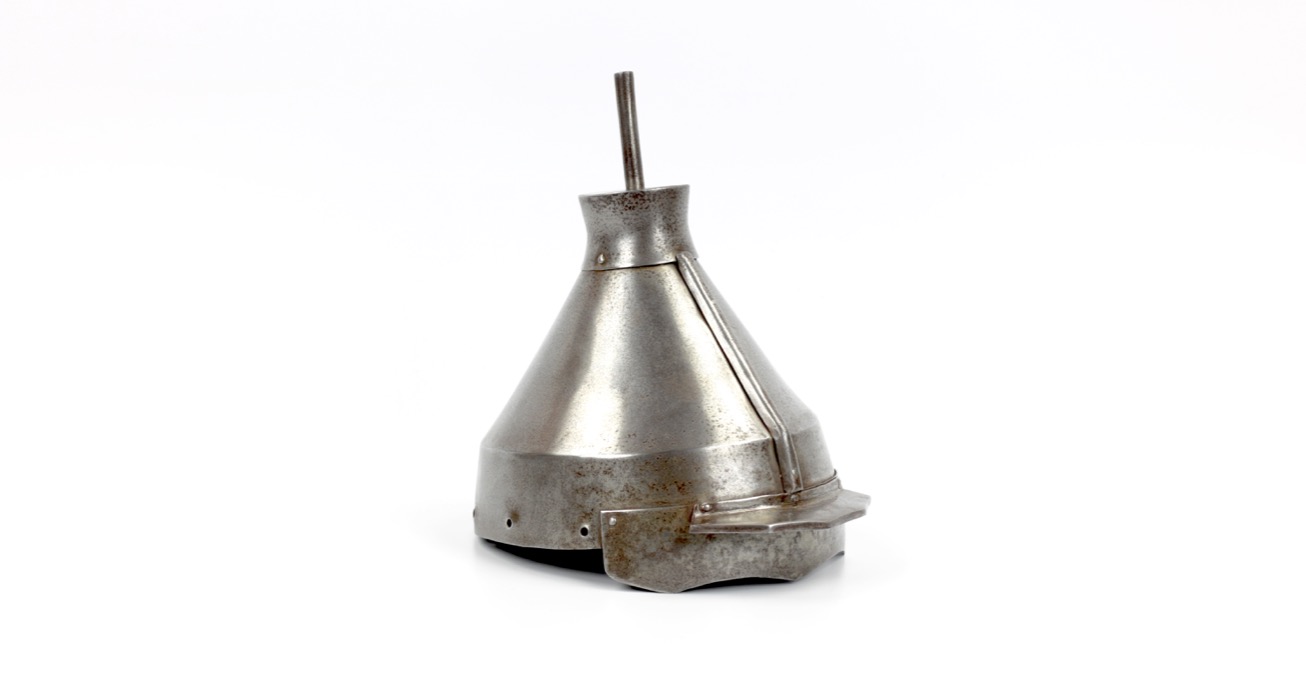 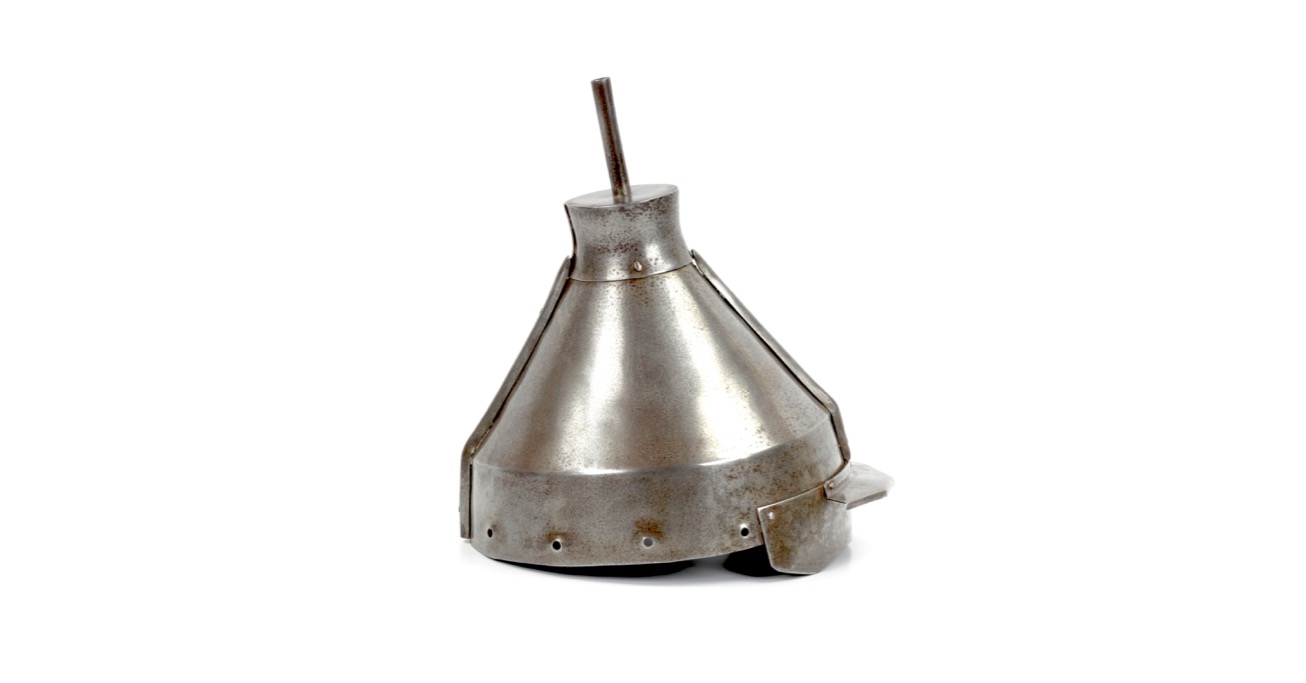 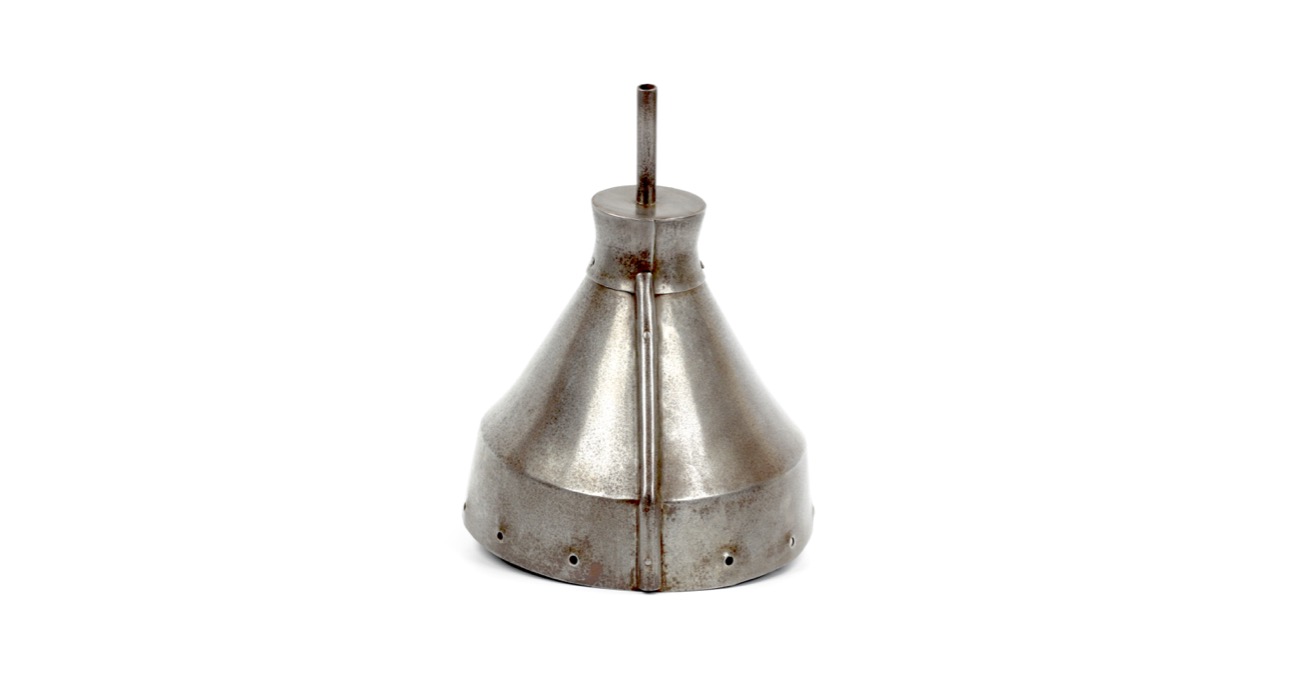 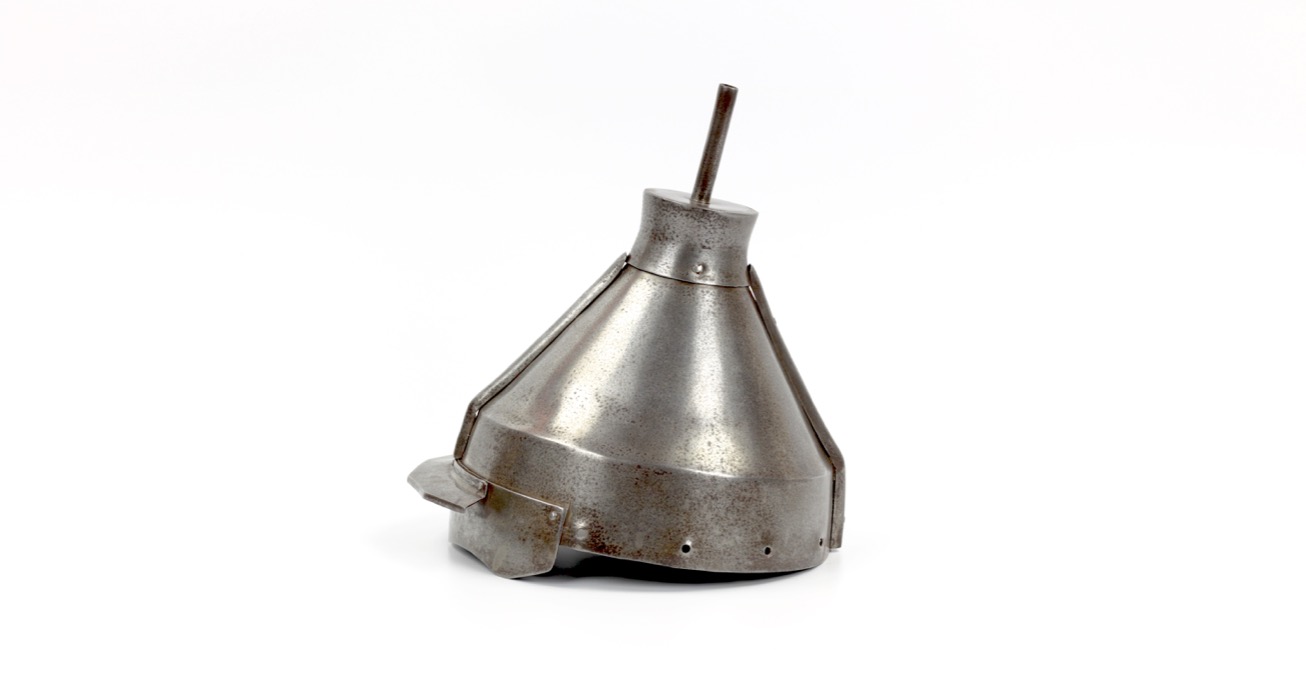 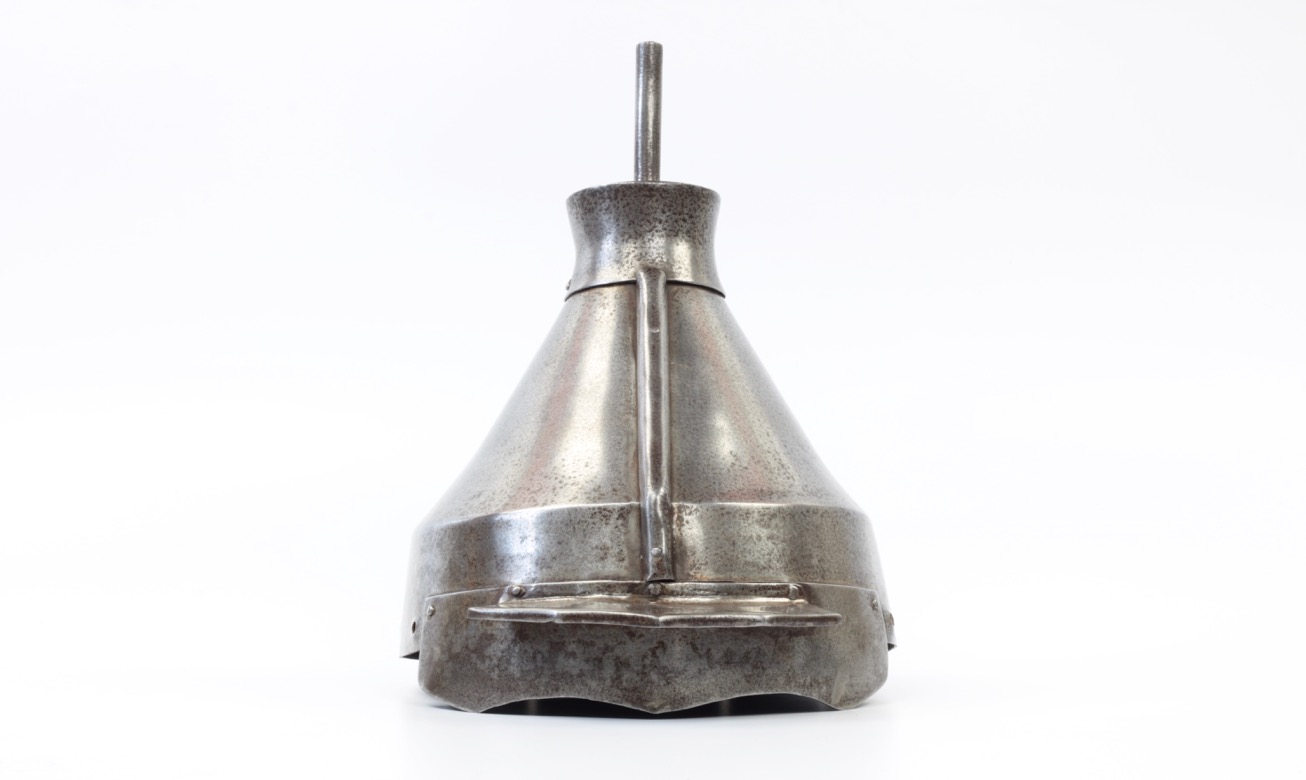 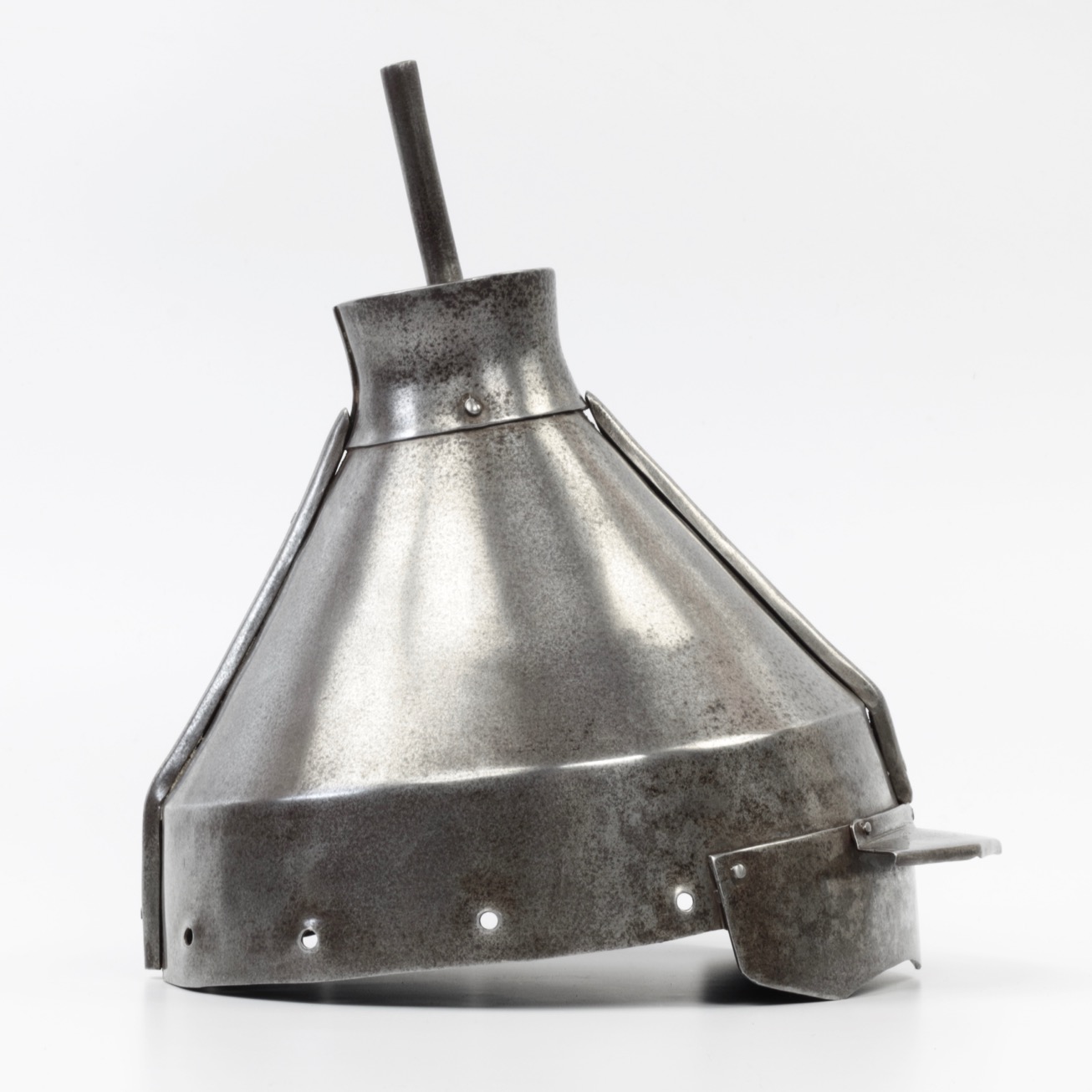 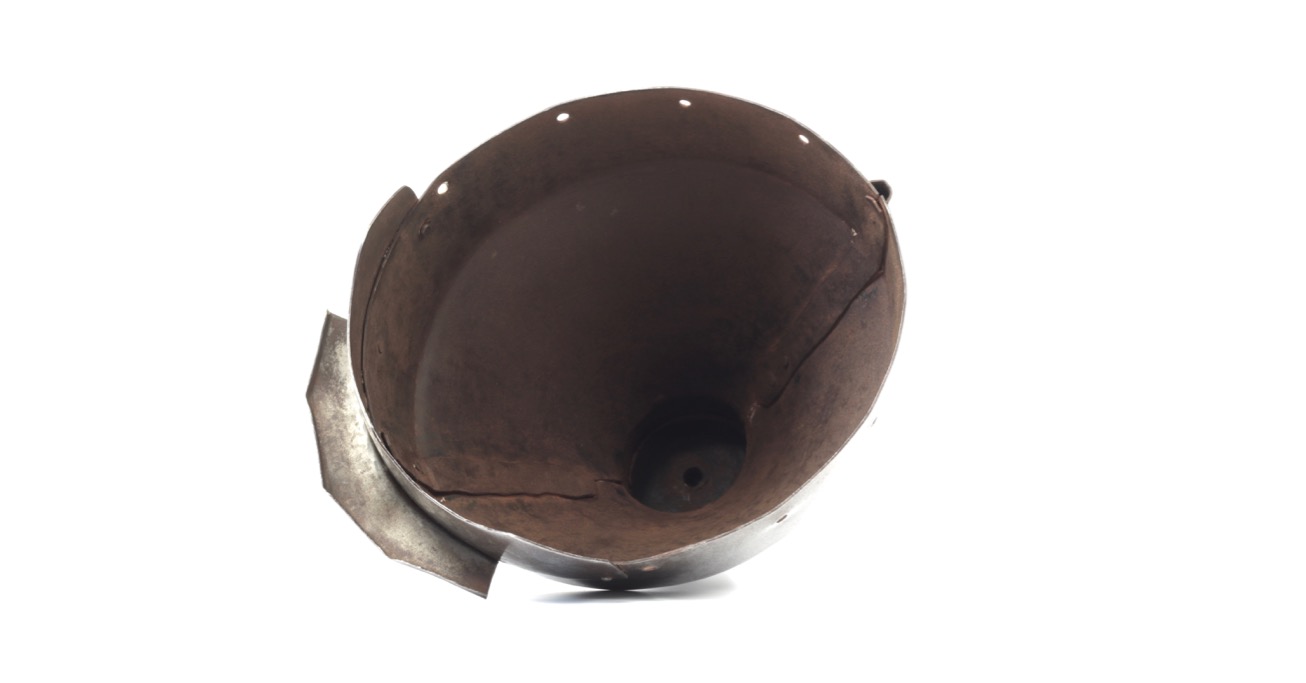 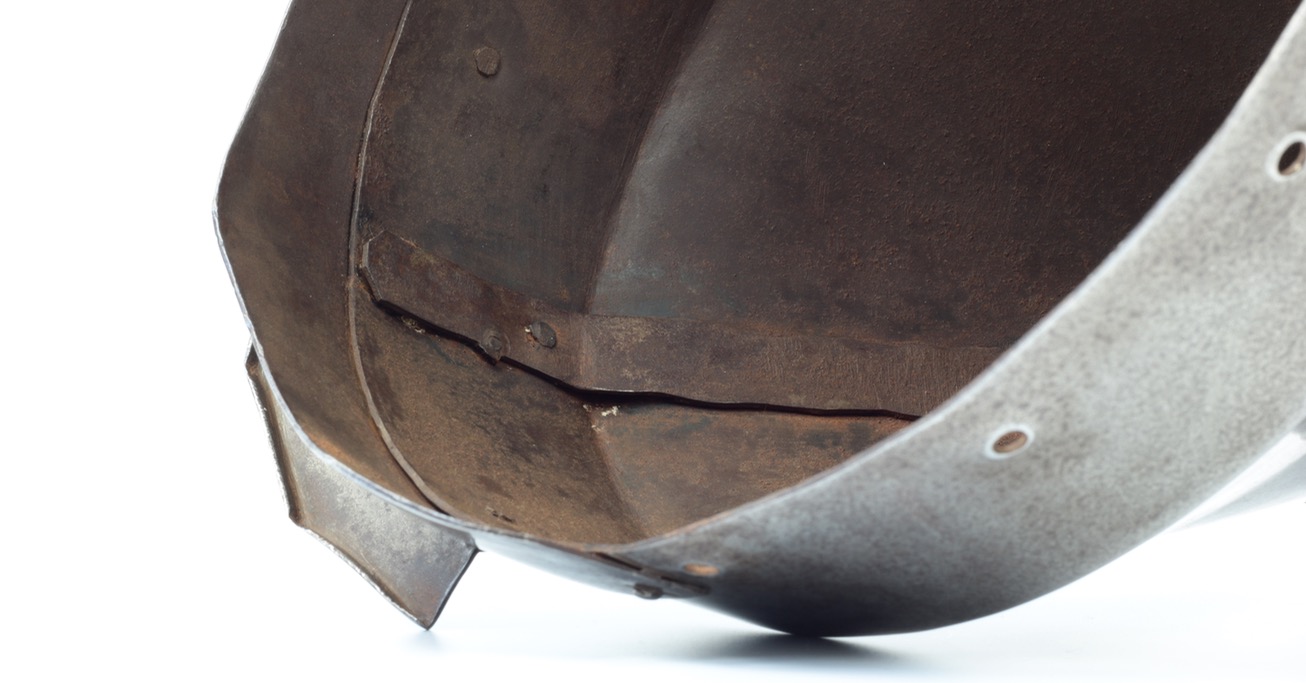 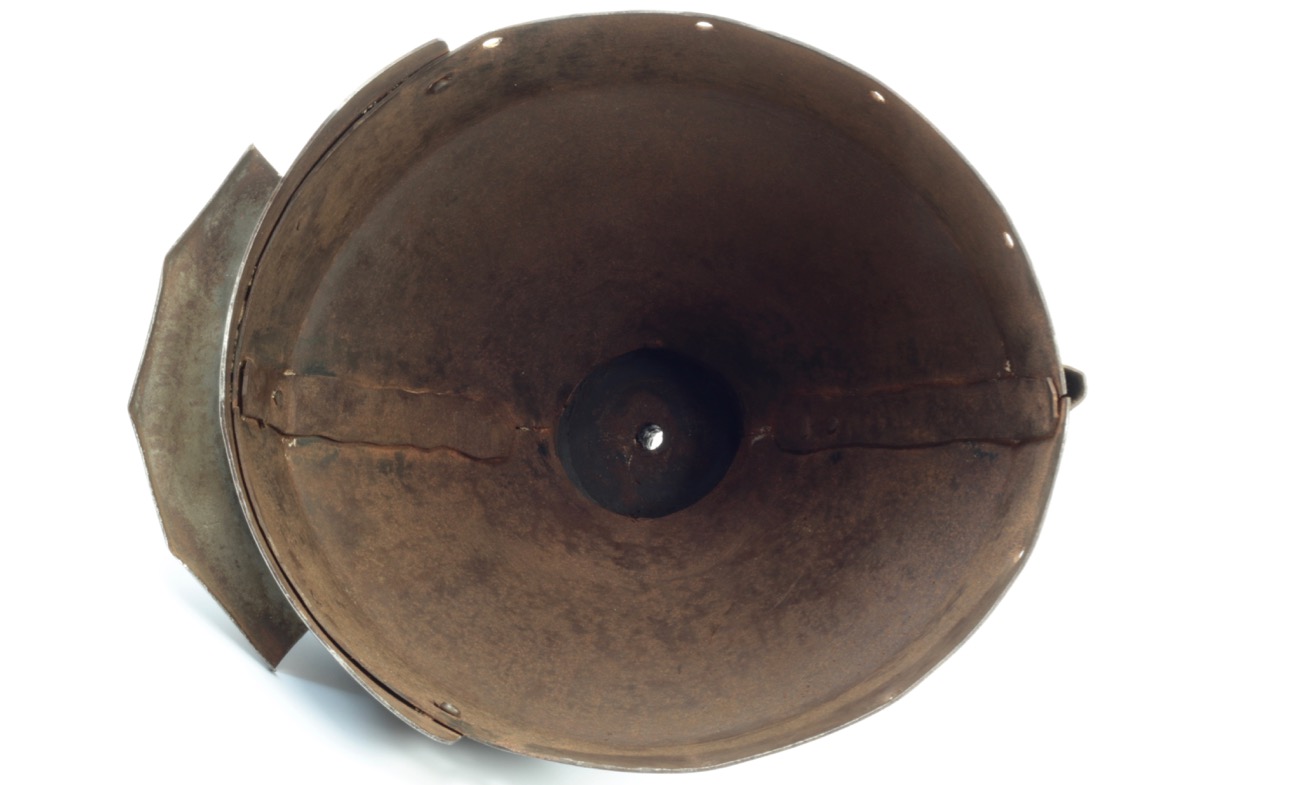 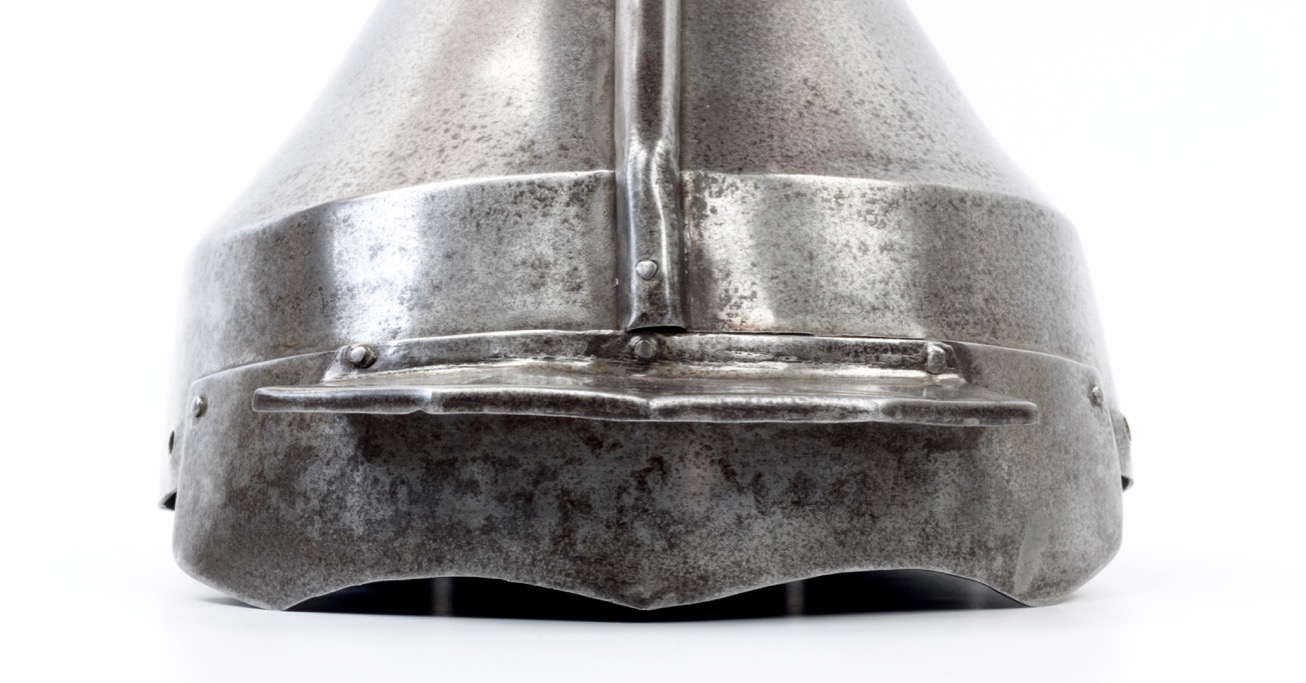 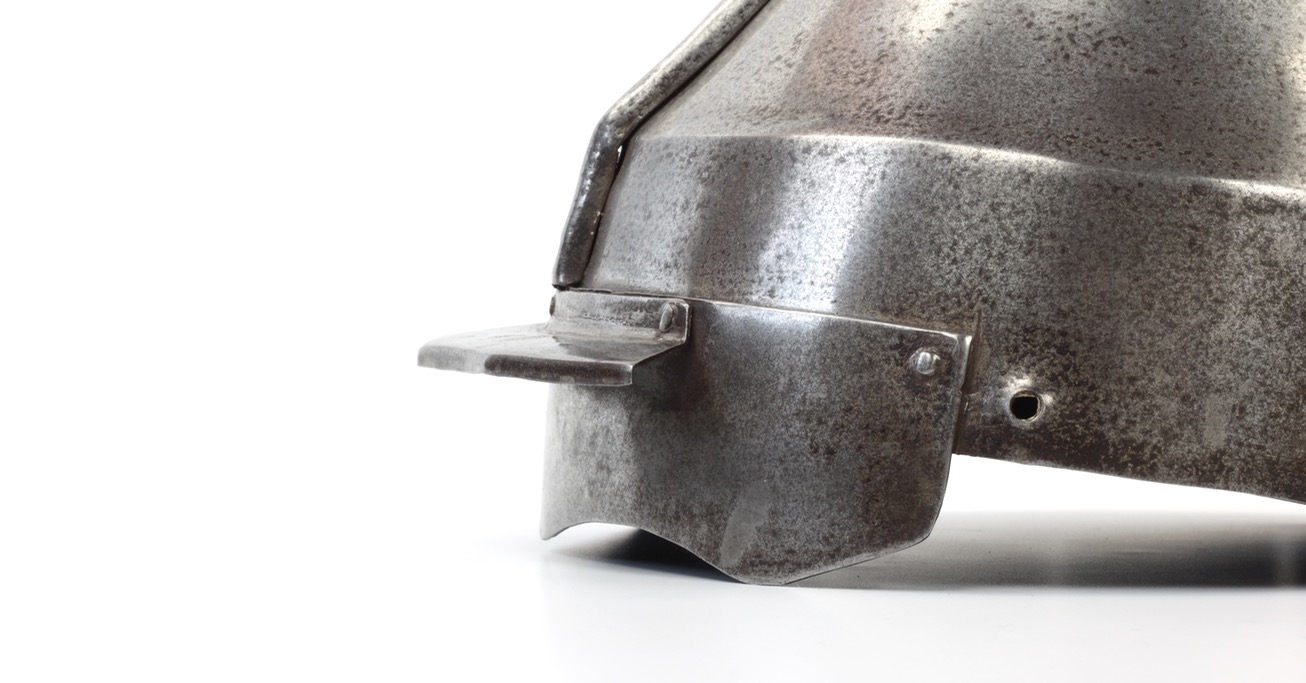 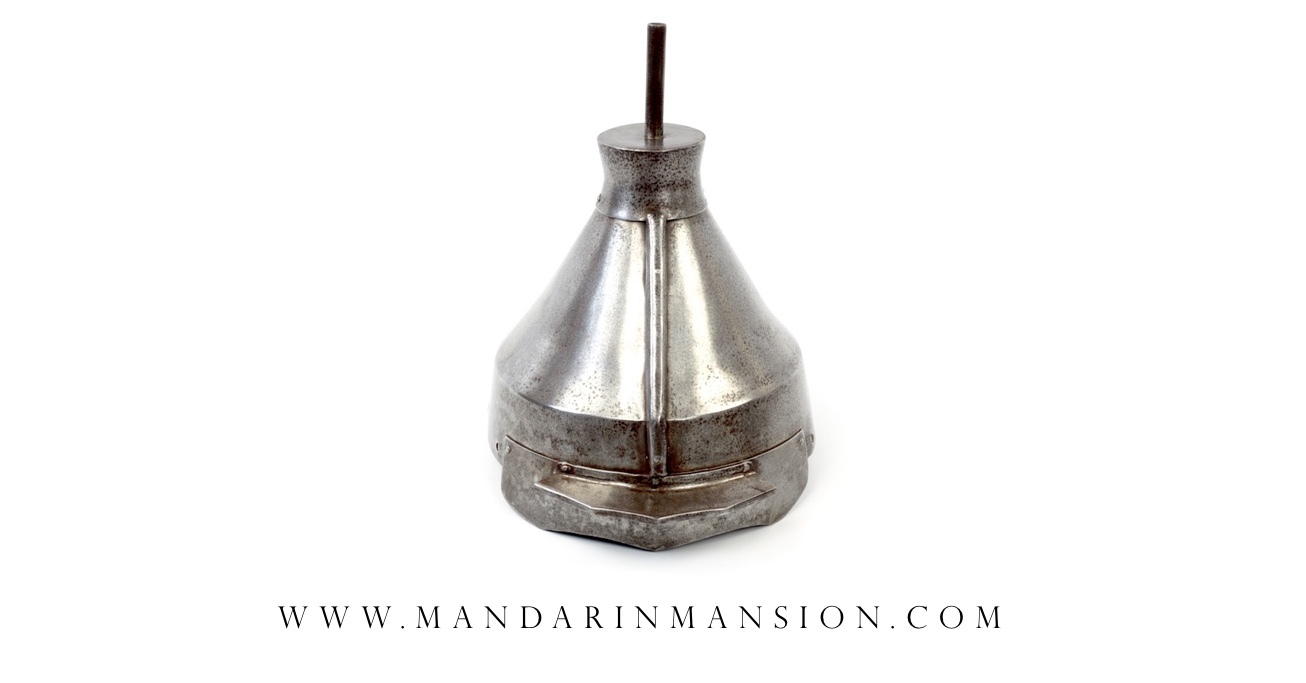