Téngpái (藤牌) literally means "rattan shield". It was a circular shield, made of a large spiral or rattan that was bound with strips of rattan skin. Such shields are described in use in China from at least the Song dynasty (960–1279). It probably originated in southern China and has always been strongly associated with Fujian. Rattan shields have long been in more widespread use in southern China where the subtropical climate is less suited for full armor.

A very large example, retaining much of its original vibrant colors. It is made in the typical way, using a coiled-up rattan core wrapped with bands of rattan skin. There is a big brass dome in the center.

The front is painted with a stylized tiger face in red, white, green, and black. It is so stylized that it isn't immediately recognizable as a tiger, and foreign observers often referred to them as "demon heads" or "grotesque faces". The experienced observer will know that Chinese tigers are typically drawn with a 王 (wáng) symbol on their foreheads, the Chinese character for "king", as can be seen here. In this example, it is more stylized than usually seen, but we clearly have the three horizontal lines connected by two vertical ones. The back of the shield is painted red entirely, this is in accordance to extant Qing military regulations.1 (I believe the ones that survived without red back were probably used by local militia or other irregular troops.) It retains its handlebar and one loop. The elbow loop that should also be there, is missing.

"The cane shield corps were really not a regular force, for they never had barracks to live in or headquarters to go to. Most of them were notorious rowdies of the town, who spent their time in fighting and quarreling.

They came on in pairs, each man carrying a shield and matched with another man with either sword or spear. They maneuvered round and round the enclosure, cutting' and parrying. Gradually the men with the shields worked round the men without shields, and encircled them. At this juncture about forty or fifty mounted soldiers came galloping in, and tried to attack the shielded men in order to save the surrounded men. The shielded men at once fell flat on the ground and began to roll and roll towards the horsemen. This was supposed to be a deadly attack upon the horses, and the latter retired. At the same time the men inside had got out, and so ended the attack." 2 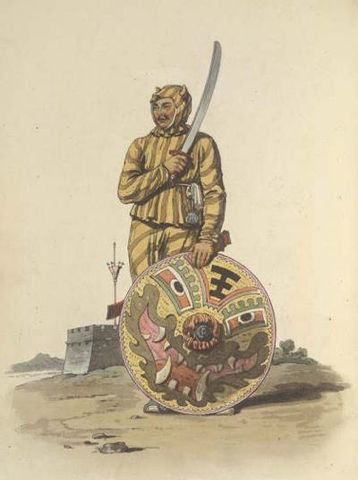 A tigerman by William Alexander,
official artist of the Macartney Embassy of 1792-1794.

The tiger iconography on these shields and the outfits of the men that used them fascinated foreign observers. They were thought to be an attempt to scare the opponent. Quite the opposite was true. The word for tiger is pronounced hǔ (虎) in Mandarin, which sounds very close to the word for protection, hù (護). Tigers have thus long been regarded as protective deities and images of tigers were pasted on doors, and even appear on children's hats to ward off evil. The tigers on these shields were there to reassure the often highly superstitious Qing soldiers of divine protection. And they needed it, because being a tigerman was one of the most dangerous jobs in the Qing military.

A nice example of a large, well-preserved tiger shield fo the Qing dynasty. It probably dates from the early 19th century, because the shields got flatter in the second half of the century.

Notes
1. Huangchao Liqi Tushi (皇朝禮器圖式), or "Illustrated Regulations on the Ceremonial Paraphernalia of the Dynasty", Palace Edition of 1766 (British Library, 15300.e.1). By Pu Jiang et al., eds. This version is based on a manuscript of 1759. Also Qīndìng Gōngbù Jūnqì Zélì (欽定工部軍器則例) or "Imperially Commissioned Regulations and Precedents of Military Equipment for the Board of Works" of the 13th year of Jiaqing, 1808.
2. Charles William Wason; Reminiscences of a Chinese official, Reprinted from the Peking Gazette and the China Illustrated Review, Tientsin Press, Limited, Tientsin 1922. Page 66.